The route starts in a small square in front of the new service building of the Valvanera Monastery. Go up the stairs next to the fountain and you will find an informative panel with an aerial photograph of the itinerary, as well as several interesting facts about other footpaths in the area. Start the ascent of the route through the pine forest that coincides for a small stretch with the GR-190, until you cross a gate and reach a large forest house. Here the GR-190 turns right, the Valvanera footpath continues straight, passes in front of the house and reaches a forest trail. Once there, ascend smoothly until you find a detour marked to the left, where you enter the path over a pipe. After crossing a control deposit, walk down a narrow route at the level of the valley suntrap. On this route you will find several dry holm-oak woods with poor soil where the roots take hold on the rocks. Cross three ravines where the pipe is visible and, over it, there are three bridges. In these ravines, there are leafy ash and maple trees that, with some beeches, form the so-called broad-leaved forests. After the last bridge, a fence protects you of a steep hillside that was excavated to pass the pipe where the beech grove is situated. A little after, you will find a group of birches with their characteristic and distinctive silver bark, and immediately there appears a Scots pine repopulation integrated in the scene. You will arrive at the dam and you will see a small reservoir built at the beginning of the 1950s. Cross a walkway over the dam to find a leafy beech grove that covers the shaded part of the valley. To go back to the monastery, travel the route covered by moss. Guide yourself by the white and purple spots painted on the beech trees bark. The beech groove of the Valvanera valley is a beautiful forest of lean trees where the shaded part is so great that there is a lack of undergrowth, with some holly and spring herbaceous plants such as hepatics and Primula. The descent has some steep parts and you will leave a detour on the left that falls into the river. You will cross a ravine describing a wide curve over stones and you will continue down until you reach the water course of the Valvanera River. After crossing a walkway, take the forest trail to the right and you will reach a picnic area where another trail appears to the left. Take this trail and ascend until you reach a short steep slope and arrive at your departing point at Valvanera Monastery.

The name of the monastery, Valvanera, comes from a Latin expression, “Vallis Venaria” which means " “Valley of the veins of water" since the valley had lots of springs, streams and waterfalls.. The origin of the building of the shrine dates back to the discovery of a 9th-century image of Saint Mary by a repentant thief called Nuño Oñez, according to the “Historia Latina” written by the Abbot of Valvanera, Don Rodrigo de Castroviejo in 1419. It is the Latin translation of a 13th century text ... 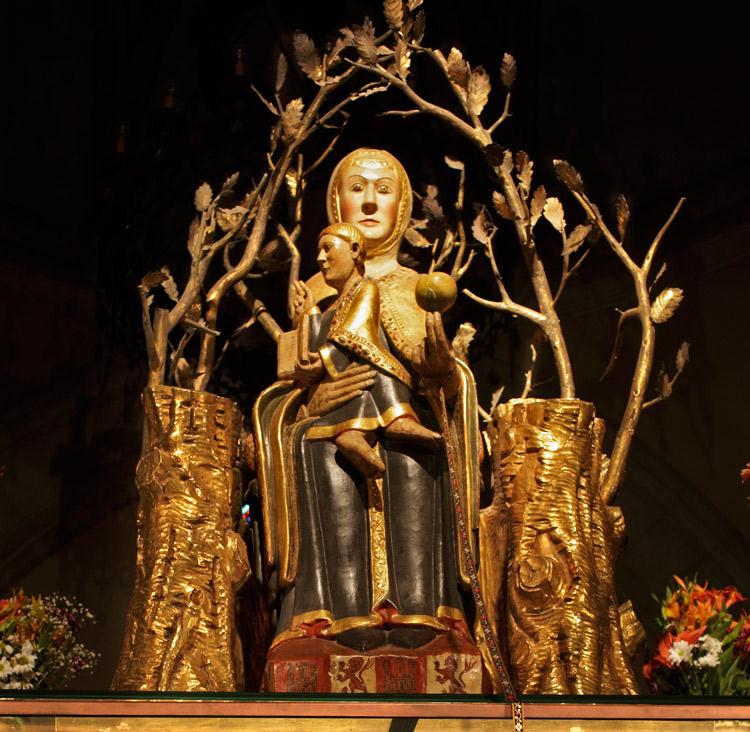 This route allows you to discover the valley of the Valvanera River and its remarkable nature and landscape. For this purpose, it makes use of an easement path located over the pipe connecting a small reservoir at the bottom of the valley to a water tank built over the monastery. From this tank, the water flows down to a small hydropower station that provides electricity to the building. This area is included within the land under the Natura 2000 network (Mountain ranges of Demanda, Urbión, Cebollera and Cameros), which comprises both the SPAB (Special Protection Area for Birds) and the SCI (Site of Community Importance) previously designated with the same denomination.