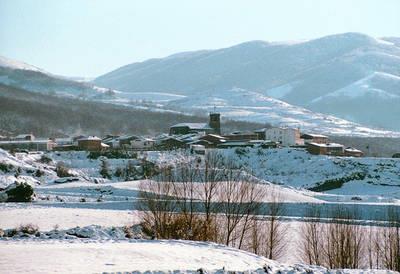 Before the Arab invasion, Santa Coloma was famous for its monastery. In 1046, King García of Nájera gave Santa Coloma to his wife Estefanía, who donated it to San Millán. There was a city wall to defend the town against the Kingdom of Navarre. During the 17th century, the town became independent from Nájera. On 8 December 1812, 60 municipalities met in Santa Coloma to present La Rioja's independence to the parliament in Cádiz.
-Surrounding area: The Santa María La Real Monastery in Nájera.

-Location: It is part of the district of Nájera. It is on the northern slopes of the Moncalvillo and Serradero Mountains.
-Area: 34.73 km2.
-Height: 763 metres.
-Economy:The area's main activity is farming, particularly barley, potatoes, fodder and leguminous plants. There is also a lot of sheep, cattle and pig farming.

In a silver chest in the crypt of the 17th century La Asunción Church, the relics of “La Santa” brought from the old monastery, that has disappeared nowadays, are kept. Monument dedicated to the independence of La Rioja.