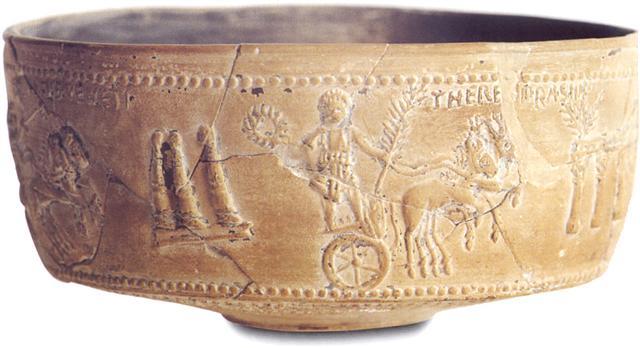 With regard to the Romanisation of the lands of La Rioja, the vestiges of the infrastructures and communication system between the Roman towns are still conserved:

Alfaro: Graccurris: this was the first Roman settlement in the Ebro river valley.

Calahorra: Calagurris and Iula Nassica: since the time of the Pax of Augustus, this became a town in its own right, with public works such as aqueducts, sewers, spas and a circus.

Varea: Vareia. This was one of the most important Roman towns, where numerous remains such as coins, pottery and the gold and silver broach of Varea have been found.

Tricio: Tritium Magallum: this was a pottery centre which distributed “terra sigillata” (stamped earth) containers throughout the Roman Empire.

Libia: a settlement whose foundations are located between Herramélluri and Grañón.

The most important road is the Ebro Valley road, from Saragossa to Briviesca. Secondary roads come off this main Ebro road, communicating Numancia through the valleys of the rivers Irregula, Najerilla, Leza, Cidacos and Alhama. A 35 km section of the Roman Road from Varea to Numancia, between Torrecilla at Cameros and Piqueras, has been recovered and conditioned for walking.

The Mantible bridge over the river Ebro, some seven kilometres from Logroño, towards Asa.

The Cihuri bridge:  a Roman bridge from the 2nd century AD, reconstructed in the medieval period, over the River Tirón in the district of Priorato.

At Calahorra, of the town’s four main gateways, the gateway of the Planillo de San Andrés still remains, together with another next to the vestiges of the ramparts under San Francisco, and a further gateway is concealed in the street of Refugio.

Of the five or six towers that were constructed in the high part of Calahorra, only one deteriorated tower, named Morrión de San Andrés, is still conserved at the Portillo de Lan Rosa.

In Calahorra there was a Roman circus around the present-day Paseo del Mercandal walk, of which only the vestiges of the northern walls remain. Also to be found in Calahorra are the vestiges of a temple, spas, sewers, drainage system, all of which can be visited.

At Alcanadre, the vestiges of an aqueduct can be found. 13 arches of the original 108 arches still remain; it is located between the Ebro river and the road from Lodosa to Los Arcos and was designed to carry water to Calahorra, 18 kilometres in a straight line.

The Sorbán Aqueduct, which possibly brought water from the area of Arnedo.

In Alfaro, 1st Century. Roman Nymph Fountain. A National Monument. A hydraulic complex comprising a dam, bridge and fountain, a place to worship the nymphs of Alhama until the 4th century.

Dama Calagurritana. (Lady of Calahorra). A removable head, 21 cms high, found in the archaeological site of La Clínica in Calahorra, dates back to the 2nd century.

At the potteries of Tricio, Bezares, Arenzana de Arriba and Nájera red ceramic pots were made, characterised by the fact that they bore a seal with the name of the potter on the base of the article, and for this reason they were called “terra sigillata” (stamped earth).

At the pottery archaeological site of La Maja, which is currently being dug, the vestiges of glass manufacture have appeared.