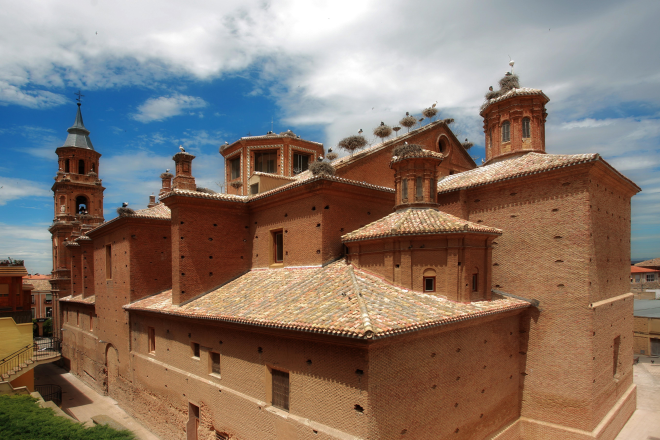 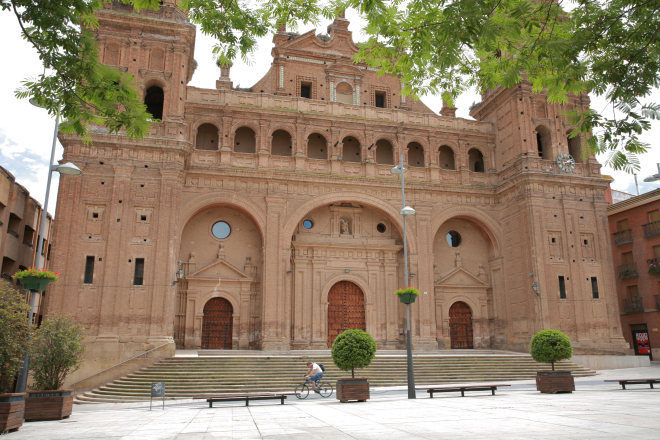 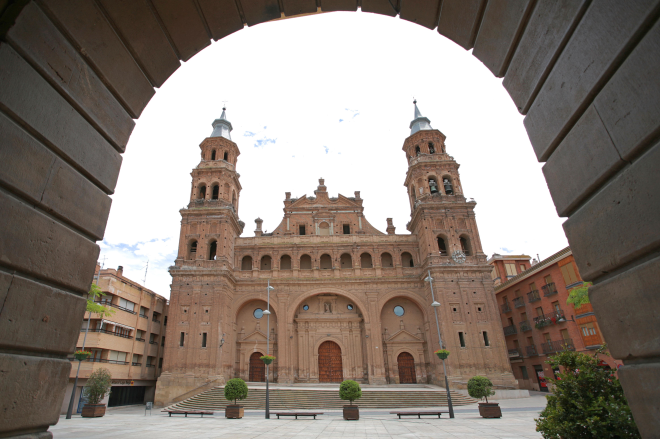 In Plaza España, at the top of a series of uninterrupted steps in the shape of a shell, rises the brick façade, a late 17th century Aragon Baroque masterpiece. It is flanked by two 50 m towers. Between the two, a central section. The lower part is divided by two large pillars.

Between them, three large arcades sheltering the monumental doorways corresponding to the main nave and the two side ones. The central part consists of a gallery featuring nine semicircular arches. The whole ensemble is crowned with the imafronte (elaborate main façade) of the main nave.

The towers consist of four sections, the first three square, the fourth octagonal. On each section, three pillars and eight, respectively, which lead to openings topped by semi-circular arches. The towers are finished off by spires.

Inside, a rectangular floorplan, there are three naves of equal height, separated by a series of brick pillars. from these pillars and the walls rise semicircular arches which support the vaults. Among the buttresses there is a long series of chapels dedicated to: Nuestra Señora del Rosario (at the head of the church), San José, de los Desposorios de Nuestra Señora, San Joaquín and Santa Ana, Santo Entierro, San Esteban, San Juan Bautista, Niño Jesús, Amor Hermoso, de las Animas, San Roque (with a beautiful Baroque sculpture of the saint) and Los Araciel (we must highlight the delicately carved and highly expressive sculpture of Our Lady of the Sorrows).

Special mention must also be made of:

- Choir: access through a beautiful and monumental Baroque wrought iron railing, work of Sebastián de Medina. It is made of walnut wood and very profusely decorated. Two series of Saints are aligned following the order of the Litany, on two choir stalls, the upper consisting of 18 stalls plus the Abbot's; the lower 13 plus the semanero. It is a magnificent work by the sculptor Rubalcaba.

- Main altarpiece of Saint Michael Archangel. Altarpiece-tabernacle in the shape of a large Baroque processional monstrance. The whole ensemble is crowned by a beautiful sculpture by Gregorio Fernández.

- Sacristía. Pieces of great value are conserved. For example, a Baroque style, 17th century ivory crucifix, with an ebony base and details in silver.