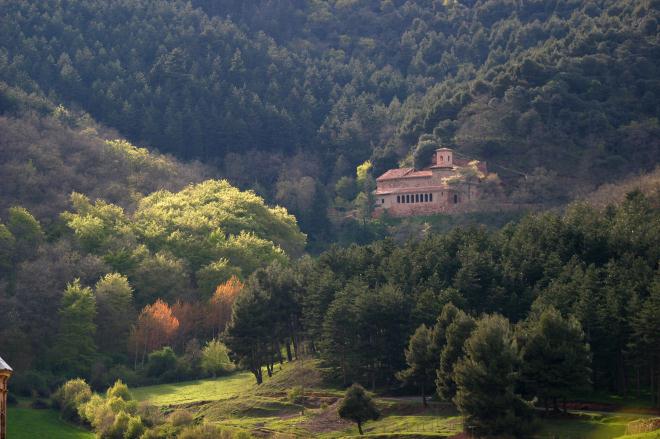 The Camino de la Lengua (Spanish Language Route) starts from the San Millán de la Cogolla Monasteries in La Rioja and passes through five locations that have had a special and unique relationship with the history of the Spanish language in Spain: the Santo Domingo de Silos Monastery in Burgos and the cities of Valladolid, Salamanca, Ávila and Alcalá de Henares.

The Yuso and Suso Monasteries in San Millán de la Cogolla: birthplace of the written word.

The Yuso and Suso Monasteries are in the village of San Millán de la Cogolla and are European Heritage Sites. They are in the Cárdenas Valley, a tributary of the River Najerilla, in the foothills of the Demanda Mountains and under La Rioja's highest peak, San Lorenzo (2,262 metres). Suso, the upper of the two monasteries began in the caves inhabited by the hermits and disciples of San Millán in around the 6th century. The building work that turned these caves into the monastery is reflected in the different architectural styles layered on top of each other from the 6th to the 10th centuries: Visigoth, Mozarabic and Romanesque. Suso's cultural importance comes from the collection of manuscripts and texts written at the Monastery's library, one of the most important during Spain's Middle Ages: the Codex Emilianense de los Concilios (992), the Quiso Bible (664) and a copy of the Apocalypse by Beato de Liébana (8th century) make this one of the most important, if not the most important, libraries during Spain's Middle Ages. This setting provided the backdrop for what is today the oldest written evidence of the Spanish language. The Yuso Monastery was built to expand the Suso Monastery in the 11th century and is particularly large. It was built during the 16th, 17th and 18th centuries and combines different architectural styles: mainly Renaissance and Baroque. The Monastery's museum houses many wonderful works of art: paintings by Juan de Rizzi (thought to be the best Spanish religious painter) and copper pieces dating back to the 17th century. The 11th century gold and ivory chests hold the relics of San Millán.
The screen closing off the church's lower choir was made in 1676 and the retrochoir's sculpture contains eight beautiful Spanish images One of the Monastery's best pieces is also in this area: a pulpit made of walnut, which is thought to date back to the late 16th century.
The Monastery's library and archive are of particular interest and are considered to be one of Spain's best. The Medieval archive's main items are two cartularies (the Galicano and the Bulario cartularies) containing around three hundred original documents.

The library remains as it was furnished towards the end of the 18th century. The true value and interest of the library is not so much the number of documents it houses (over ten thousand), rather the unusual nature of the items. One of these unusual pieces is the "Gospel of Jerónimo Nadal", printed in Antwerp in 1595. Although it is unusual to own a copy of this edition, the actual format of the book is even more unusual, as all the sheets are painted one by one in various colours.
For more information about the San Millán Foundation's activities at the Yuso and Suso Monasteries, go to: www.emilianensis.com.