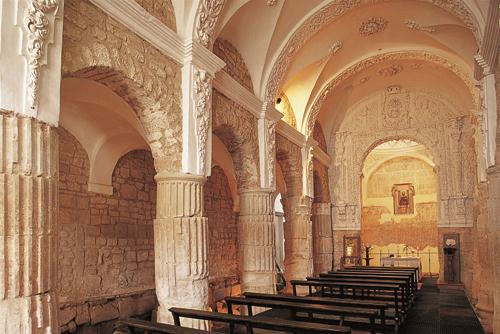 Basilica of Santa María de Arcos, in Tricio.
This is the oldest religious monument in La Rioja. It was originally a 3rd century Roman mausoleum which was converted into a Christian basilica in the 5th Century, re-using architectural items from the old Roman city of Tritium Megallum or Tricio the Great, which encompassed the current village of Tricio, Nájera and other nearby localities. Some 5th and 6th century Paleochristian tombs were discovered buried under the basilica floor, in addition to some re-used 1st and 3rd century a.d. Roman sarcophagi and other medieval ones; also some Roman funeral stelae and a Paleochristian stela. The chevet conserves the remains of some end-of-12th Century Romanesque paintings, repainted over the original 5th Century Paleochristian originals.

The building has a typical basilican structure with a longitudinal floor plan with three naves and a square chevet. The side naves are separated from the central nave by a series of arches resting on Corinthian columns formed by fragments of 1st century Roman columns. In the 18th century, the basilica interior was covered with Baroque fine ornamental plasterwork. The original carving of the Virgin of Arcos, a 9th Century pre-Romanesque black Virgin is to be found in the parish church of Tricio.

Martyrium of Santa Coloma
Of reduced dimensions, it may have been constructed in the 5th Century. It is composed of three square chambers; underneath the largest, central chamber there is a small crypt accessed by two narrow stairways from the side chambers. The crypt is covered with a pendentive dome and the sides with spherical segments on pendentives. There are references of a former monastery at Santa Coloma, restored by Ordoño II in the 10th century, and of martyrs’ tombs.

Pre-Romanesque. Mozarabic art.
The use of the horse-shoe arch and ribbed vaulting can be seen at: the Hermitage of Santa María de Peñalva, in Arnedillo; the Hermitages of San Pedro and San Andrés, in Torrecilla in Cameros.

The Romans
The Romans left an important legacy in our lands: roads, bridges, aqueducts...